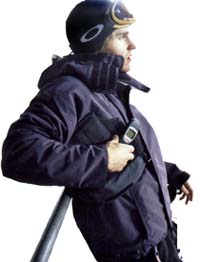 I designed the first prototype hardware for the Reima Smart Shout in 2000. It was a communication system intended for snowboarders [1], and was on the cutting edge of wearable technology at the time. It won an ISPO award back in the day. Nowadays it is technologically outdated; however, the interactions are still quite novel. Aiming to be one of the earliest commercial wearable products, the Smart Shout was a sash enabling voice communication between snowboarders. The role of the prototype was to develop towards a commercial product, a proof of concept. As standard mobile phones at the time were difficult to operate outdoors, due to cold and the need for gloves, a wearable for controlling the phone was created. The user interface consisted of small textile straps that could be pulled with gloves: using them, voice messages could be relayed to others.

(Unfortunately my own pictures of it have faded in time. These have been saved from Reima (l) and Digitoday.fi (r).)