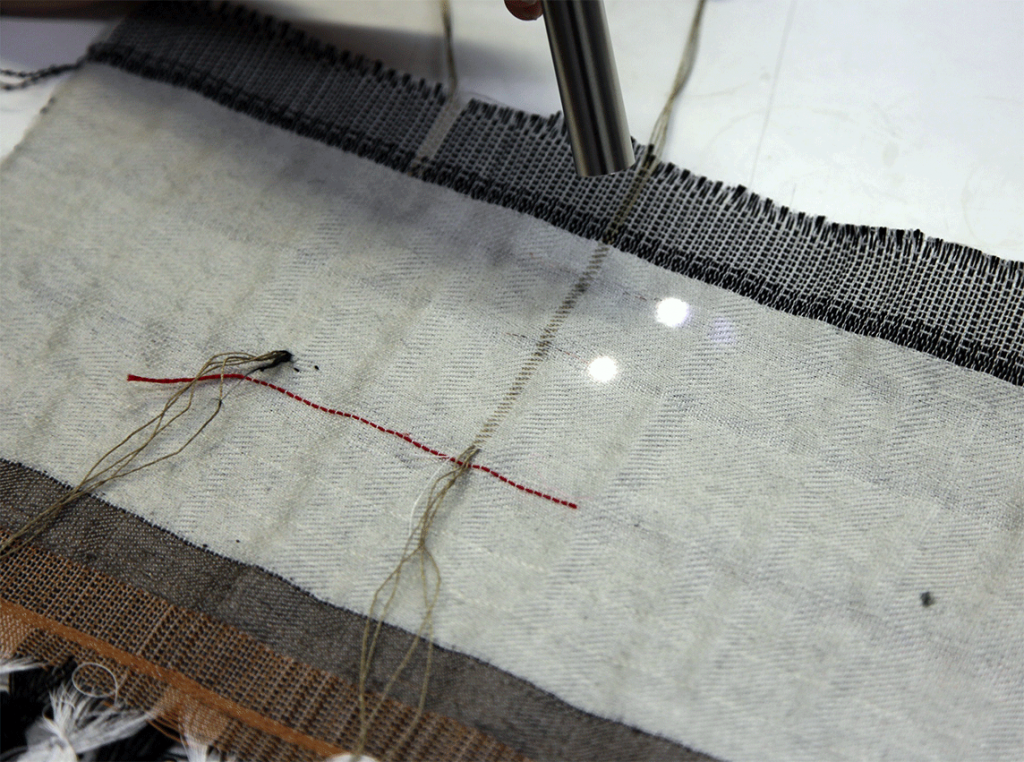 The field of eTextiles is already established, although it seems that woven methods are still less explored as of this writing (August, 2016). Since the weaving machines are much more time-consuming to set up, it is just one of the reasons for not utilizing them in the development of interactive textiles. However, they do offer the possibility to create complex fabric structures to e.g. create pockets, multiple layers and sensor-structures, all possible with mixing in conductive yarns. In order to explore the basis for building more complex circuits with wowen-in components, we used two-warp- weave to create two-layer fabric. The work was presented in ISWC publication [1], which I wrote (~95%), with Emmi Pouta weaving the fabric for her MA-thesis, and giving the information on the structure.

Creating good connectivity requires replacing parts of some yarns in the warp. By using prepared components, weft can also be without conductive yarn. For weaving, we used TOIKA EWS16 loom. Warps consisted of two different yarns, for upper fabric we used mercerised cotton Nm 64/2, and for lower fabric lyocell tex 74×2. Warp density is 16+8 yarns/cm for upper and lower, respectively. For this experiment, we used Statex Shieldex 235/34 1×4 HC+B yarn, which has acceptable conductivity for low-power applications. In order to create voltage lines (+5V and GND) we replaced four parallel warp yarns on the top-layer fabric system, as well as on the bottom-layer fabric system. This creates several reliable connection points for attaching the component pin-threads. Two different wool yarns were used simultaneously in the bottom layer weft for fuller texture, but only single cotton yarn for the top layer weft. For our test circuit, we chose surface mounted components: SL353HT Hall-effect sensors (SOT-3), and white LEDs (PLCC2). Sensors are directly connected to the LEDs such that the LED is normally on, and when strong magnetic field is present, it turns off. We prepared 5 pairs of each for the weaving, and wove in two.

The fabric has been demonstrated as working, and has been used as a basis for exploring woven structures further.